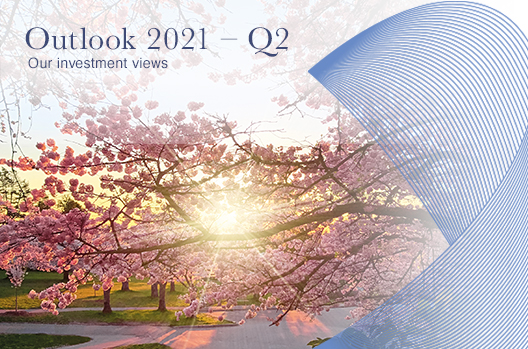 Outlook Q2 – Our investment views 2021
The first quarter of the year seems to confirm the analysis that we put forward in our last publication: the economy is continuing its recovery and is edging towards reopening; the vaccination campaign is in full swing despite some slowdowns seen in Europe; monetary and fiscal support is continuing, and risky assets are maintaining their rise.

Quarters go by but the COVID-19 pandemic remains our major concern. Indeed, the new increase in cases in Europe shows that the epidemic episode is not over and seems with us for a long time to come.

With this particular context as a backdrop, in this publication, we will deal with our expectations regarding the virus and its impact on the economic recovery, but also with the results of companies and the American elections.

We are in the second wave

We have been talking about the risk of a second wave for several months and trying to assess the potential consequences. As we explained in our previous publications, the second wave that hit the United States from June showed a sharp rise in cases with a stable death toll, if not lower than in the spring. This is now confirmed.

The announcement of new daily cases peaked on 16 July and then slowed down until mid-September, dropping from 78,389 to 25,000. For the number of deaths, the peak was reached in August with 1,842 deaths recorded in a single day. In the first wave, the United States recorded 2,584 deaths per day at the height of the pandemic, i.e. 1.5 times higher.

The decrease in the number of victims that we see today seems to be due to two main factors: first, better preparation and management of serious cases by the hospitals; secondly, a lower total number of contaminations even if the figure is not verifiable, because the test policy is less sustained during the second wave than during the first.

While this finding is encouraging from a health perspective, it is not enough to rule out any risk of local or generalised confinement, the impact of which can be significant for economic activity as well as for market volatility.

However, the main cause of the establishment of confinement is directly linked to the occupancy rate of intensive and resuscitation units by patients suffering from COVID-19. Governments in several countries have said this over and over again.

However, it is almost impossible to frequently retrieve this data, so we cannot rely on it to anticipate the establishment of a new confinement.