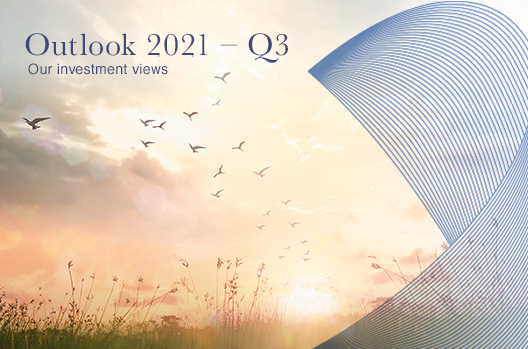 Outlook Q3 – Our investment views 2021
The second quarter of the year was marked by the gradual reopening of many economies and a recovery in activity that was stronger than expected. This recovery was driven by a demand shock and continued accommodative central bank policies, despite inflationary pressure caused by a delay in supply.

The first quarter of the year seems to confirm the analysis that we put forward in our last publication: the economy is continuing its recovery and is edging towards reopening; the vaccination campaign is in full swing despite some slowdowns seen in Europe; monetary and fiscal support is continuing, and risky assets are maintaining their rise.

However, we are seeing a regime change that has arrived more quickly than foreseen. Fear of a rise in inflation, linked to the progression – brutal in proportion, but contained in absolute terms – of American 10-year rates has amplified the sector rotation triggered by the announcement in November of the effectiveness of vaccines and by the correction in new economy stocks.

Is the economic recovery still underway ?

As explained in our last publication, we think that 2021 will be the year of the recovery. Growth numbers for the fourth quarter 2020, the figures for which are presented as an annual rate, confirm this trend. Within this framework, growth in China was 6.5%, which was better than expected and higher than the figure of 4.9% published for the third quarter. While export resilience is playing a major role in these results, domestic consumption remains sadly weak.

Consumer behaviour, as well as the dynamics of export figures, must therefore continue to be watched. With growth of 2.3% in 2020, China nevertheless was the only major economy that had positive growth last year. Following the example of China, India also published growth figures better than expected in the fourth quarter, with a rise of 0.4% against a reduction of 7.4% in the previous quarter. The strong rebound in construction and manufacturing activity saw a resumption of growth in GDP after two consecutive quarters of contraction.

In the United States, GDP also showed a recovery dynamic for the fourth quarter with an estimate of 2.4%, after contractions of 9% and 2.8% recorded in the second and third quarter. The main contributors at year end came under the heading of exports and consumption.